I took a class titled “Digital Sound” at SAIC. It was hands down the best class I’ve ever taken. It had little to no lecture or predetermined teaching material. The students were a mix of experience levels. Each class just consisted of us sharing work and discussing how to solve the issues we students were having. Students shared impressions of each other’s work, how they might solve a problem, advice, give encouragement, etc..

Some people may not have enjoyed the lack of structure, or level of freedom to pursue whatever you were interested in, but I loved it. There were people who were interested in edm, kpop, hiphop, rock, and sound art. I was focused somewhere between ambient electronic music and sound scoring. but I took a pretty big detour down the music theory rabbit hole, with some direction from the professor, but largely on my own time. I took notes along the way, which are below, along with some of my favorite explanations of concepts that I found on YouTube videos.

Notes, (or pitches) along breaks (or rests) as they change over time are the fundamental components of music.

Melody is notes played, each note having a pitch, in a sequence (one after another)

Harmony is different notes played at the same time

At this point I went in to the samples library, and spent a couple weeks just building 2 songs by dragging in samples one at a time, each in their own track, and moving things around until I had a song.

Then, in week 3 I decided it was time to actually learn how to make music from scratch by myself.

Learn music theory in half an hour by Andrew Huang

Much like before, I enjoy hearing things from multiple perspectives. So just sit back and watch this one without a keyboard in front of you, just soak it in.

Music Theory for Producers I by Taetro

Now is time to plug in your midi keyboard and follow along.

Ok, so thats what a chord is.

I wanted to start playing around with my keyboard at this point, but pausing the video to find each chord was annoying. This page of chords with pictures was helpful.

Common Chord Progressions Every Beginner Should Know by PianoPig

Sure, interesting why not.

10 Powerful Chord Progressions Every Songwriter Should Know by Peggy Hogan

How To Write a Song In 5 Steps by Peggy Hogan

Putting the music theory together. She is using Ableton, but I didn’t have any issue applying these ideas to Logic.

In order to make music appealing, a balance must be struck between how much melody and rhythm change over time, as well as how much they stay the same.

This was a phrase I heard a lot, but I didn’t know how to make it happen, until I saw this. 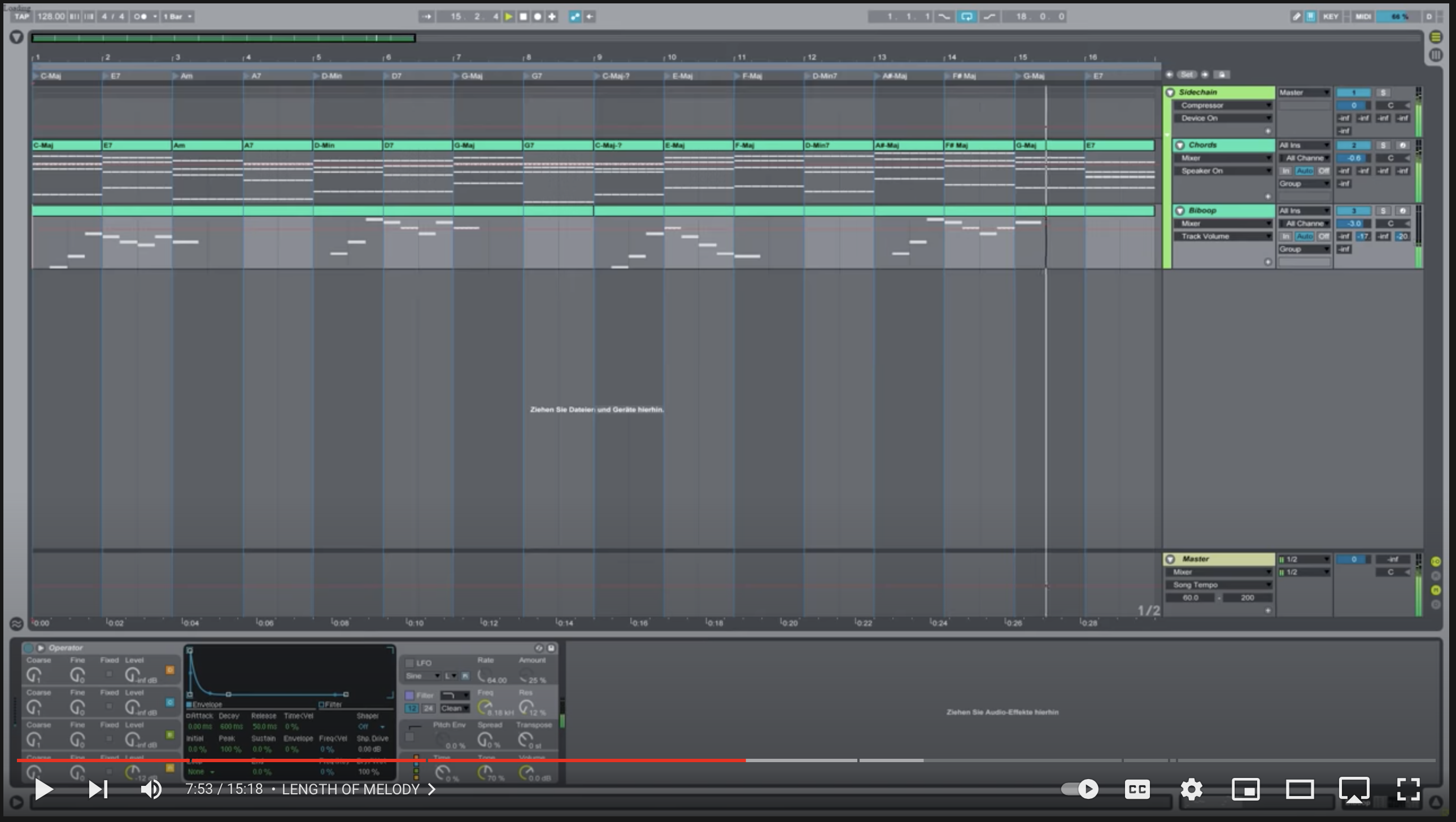 How to Write a Melody by fastforwardable

Poor video quality, and uses classic song notation (not a bad thing, just not previously discussed in any of these videos), but it has some really easy to follow ideas.

I started with this one, its pretty thorough. It doesn’t get much in to why you might use the tools, but it covers how. I’d say just watch this one all the way through, and then watch the next video with Logic open and follow along. I always find hearing things twice, from different perspectives, really helps it gel.

This one is a little more advanced, jumps around a tad more, but I think between the two videos you should have what you need to get started. I am the active generation of questions. I begin from the words. They are like my mother. They surround me, scold me.. love me.. they comfort me when I am hurt and alone. The machine does not understand its own poetry, it mimics human cognition, a self-referential structure creates infinite loops of meaning and understanding