I don’t remember the exact moment I found Thorsten’s work online, but I do remember it striking a chord that resonates until this day. He takes beautiful, timeless photos and I desperately wanted to learn anything I could about the results he was getting. Despite never having taken a photography workshop to that point I just had to attend.

In case you aren’t familiar with his work, I will be highlighting some of his preferred methods as well as his images that exemplify them. I think there are some nice examples of the beautiful photos he has captured over the years.

Between what I learned in the workshop, and a couple of years more experience, I think I have a pretty good handle on why his photos are often so beautiful. He will tell you it is primarily “magic light” and secondarily Leica cameras and lenses. Even after three full days with Thorsten I am still not sure I understand what magic light is (it seems to be soft, diffuse light but he has a radar for it that I lack). But I have definitely figured out the gear component of the equation. A full frame sensor with incredibly high quality, fast glass can create impressive subject isolation and an almost 3D effect. 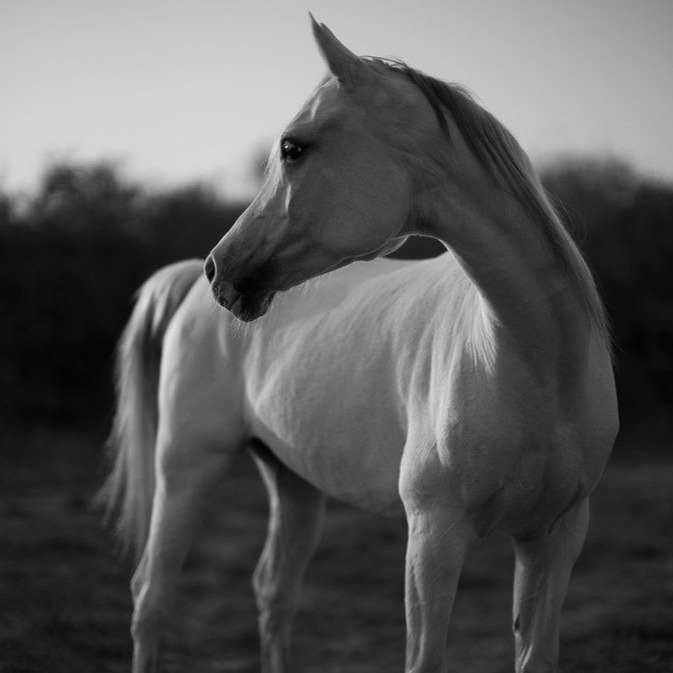 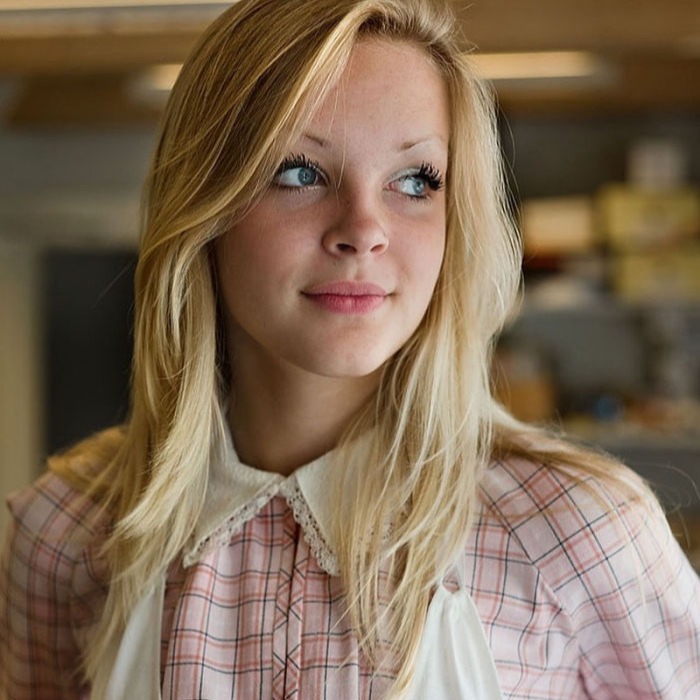 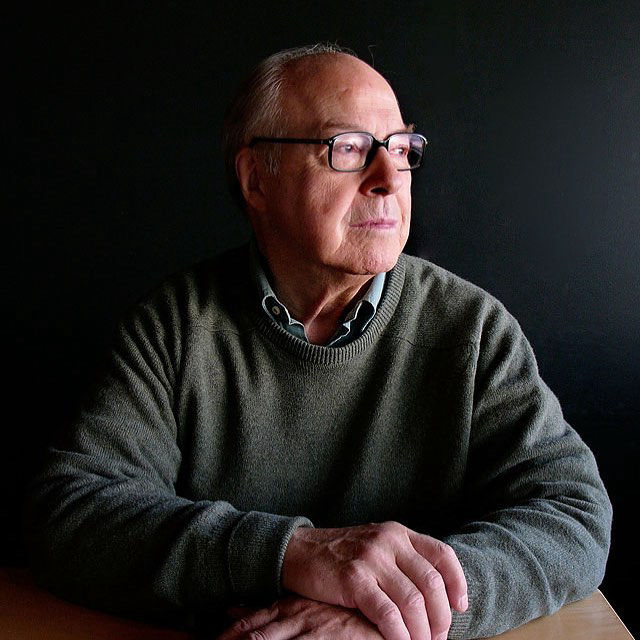 This is often referred to as the “Leica look”. It is characterized by a very smooth and fast in to out of focus falloff. The effect isn’t actually unique to Leica, but since the the company only makes high quality, fast glass, it is much more achievable with far more combinations of Leica bodies and lenses than other systems. It is about as close to a medium format look you will get without actually getting in to a medium format system.

Thorsten also cranks his camera’s capabilities up to 11 by shooting the fastest aperture for 50mm you can get, a Noctilux 0.95. With a rangefinder at 50mm, focusing at 0.95 can be quite challenging. Thorsten generally uses an attachable evf, though he gets similar results with the rangefinder window from what I have seen. You probably assume I am about to say he is stellar and every shot is in focus? Not at all. Many of his shots could be classified as “soft” (rather than “out of focus”). If you peruse his feed you will also find some examples of the latter, but that can happen with any lens so I wanted to highlight how near you could be to getting focus while still not quite achieving it.

The Noctilux really raises the bar, and you need to decide if you are willing to come home to find a lot of near misses? Oh you also need to decide if you want to drop 12 grand on a lens. I have personally decided not to, despite eventually getting in to Leica myself. That said a f/1.4 Summliux or f/2 Summicron can still render beautiful creamy photos, and focus is much easier to nail. 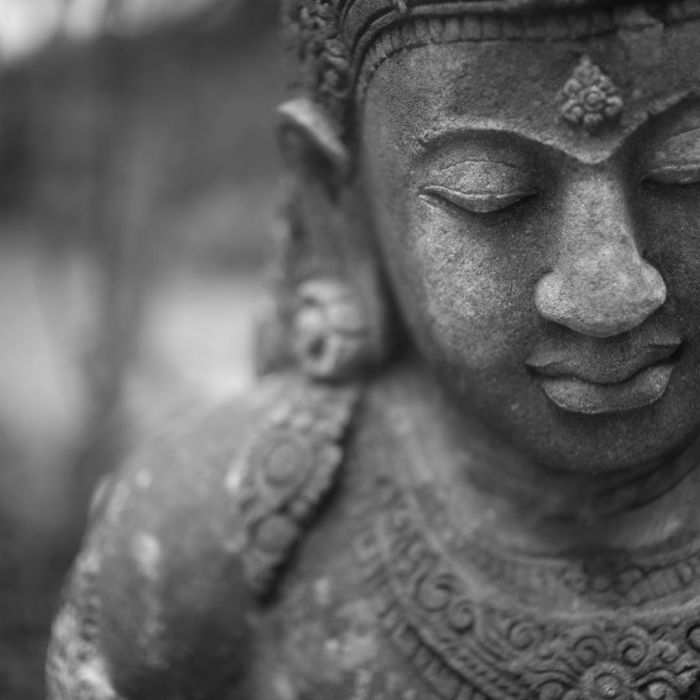 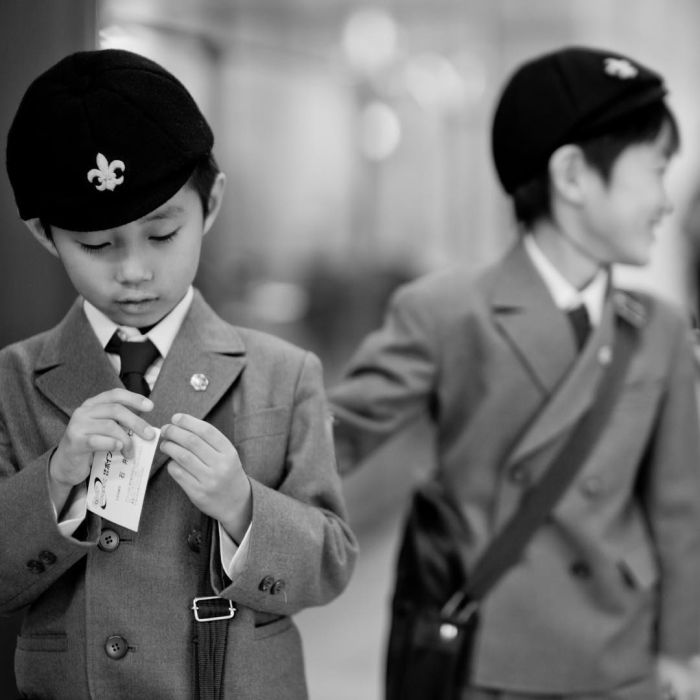 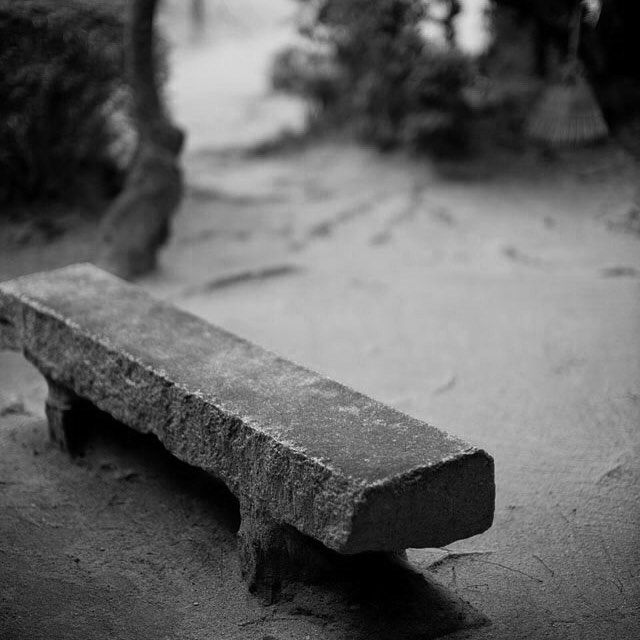 So far I have covered Thorsten’s equipment and settings and radar for great light. I probably don’t need to point out he has an amazing eye for subjects and composition. But since I am a street photographer I will just go ahead and address it before anyone brings it up. No Thorsten does not consider himself a “street photographer”, however he definitely takes some nice shots that are in fact street. 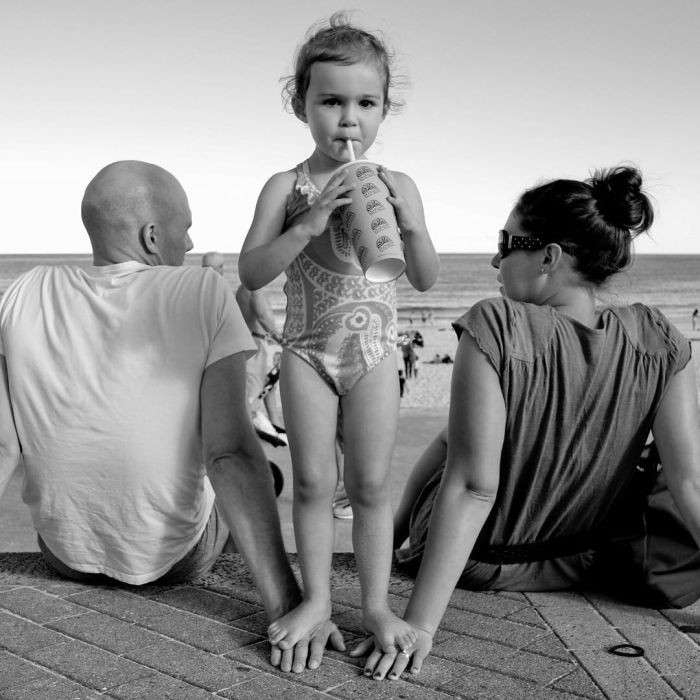 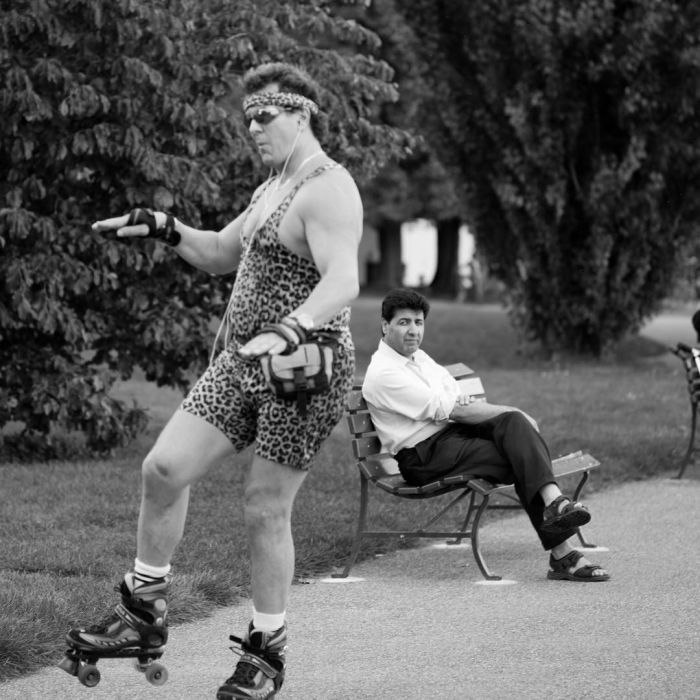 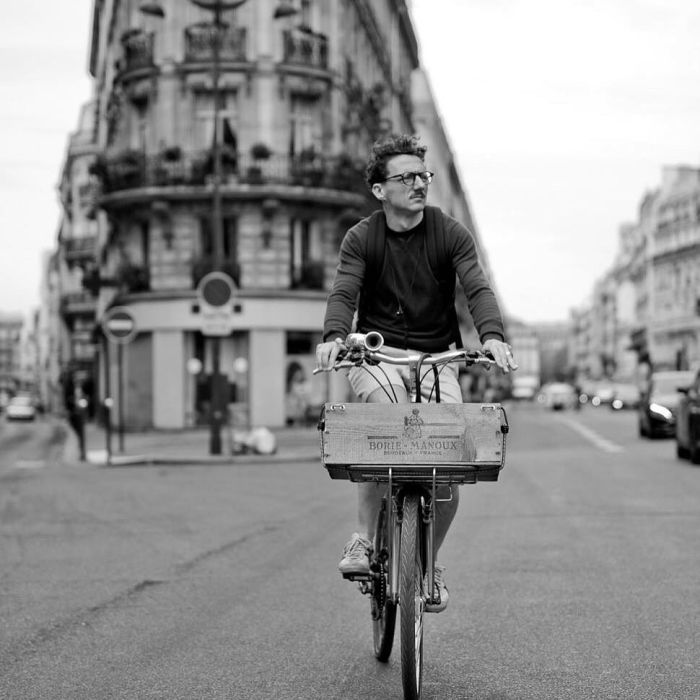 With Thorsten’s credentials out of the way, let’s get in to the workshop itself.

As I mentioned this was my first photography workshop, so I had no expectations. Having attended more since then I will say that Thorsten’s workshop involves a lot more shooting time than classroom time. I happen to still have the email with the itinerary:

We will be meeting on January 7 at 6PM. The first evening we will do introduction and theory and will end off around 9.30 PM. This day we will be in the same location all evening, so you can bring cameras and lenses (we want to see them!).

On the 8th we will be meeting at 10 AM at the address, or perhaps we decide for a cafe as a meetup place. We will be out and about walking all day, so usually we agree to dress light in terms of equipment. It’s a casual and fun day, but when we end off around 5PM you will be tired and ready for a quiet evening.

On the 9th we meet at the address at 10AM and this is the first day you need computers. We will be talking workflow and then we will import and edit the photos we did the day before. Before we end off in the afternoon we will each select three photos we will share with the others.

On the 10th we meet at the address at 10AM and will drop off computers and then go out to find magic light for portraits. It’s not a walking day, often we find good light just around the corner. After portraits we will do model shoot with Joy Villa, and then we head back and import and edit those photos. Again we will edit all pictures and select three each to share with the others. Expect to end off latest by 5PM.

So the workshop started off with a talk about magic light, much of that content can be found in his Finding the Magic of Light ebook. This is really a look in to his head about what he prioritizes in photography. There is an aesthetic brought on by good, soft light that tends to be the first thing he looks for before pressing the shutter. This talk was not technical, there was no discussion of iso, aperture and shutter speed. It was meant to be philosophical and inspirational.

After that we spent most of the next two full days wandering around the streets of Austin shooting pictures.

I had done very little actual candid photography of strangers up until this point. I took plenty of pictures of houses, cars, graffiti, etc. that were more in my comfort zone at the time, but this was probably the trip that confirmed for me my favorite subject was people. I am not the kind of person who is particularly comfortable striking up interactions with strangers, but there is just something about a photo of a person that feels so much more alive than one without. And a candid photo is nearly always more interesting than one posed. This workshop really helped drive that home for me.

As I mentioned, we largely spent our days walking and talking. We didn’t get taught a lot during this phase of the workshop (though Thorsten was always happy to discuss any questions we had) but I still felt that I learned so much, even more than the more classroom and directed portions of the workshop. These two days of exploring Austin and myself as a photographer were a transformative point in my photographic journey that I will forever be grateful for. 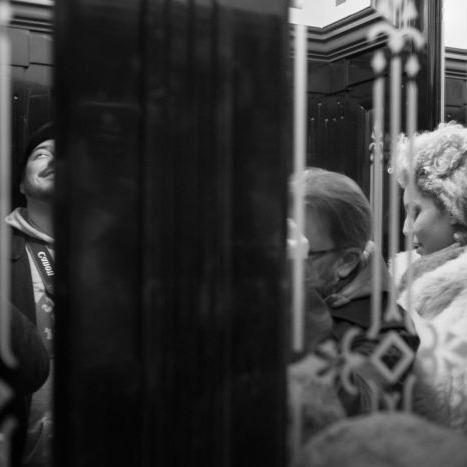 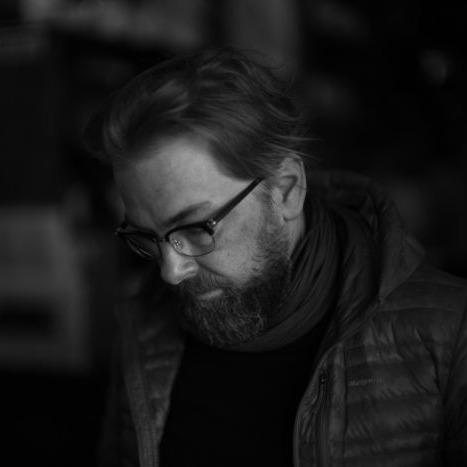 On the last day of the workshop Thorsten loaned me a Leica M240 (the newest digital M at the time) and Noctilux. He was incredibly generous with his equipment despite its hefty cost. I joked he must be getting a commission for turning so many people in to Leica fans, he just kind of shrugged as if to say spreading the word was reward enough.

When we went to lunch I practiced with the new system. It was impressively difficult to focus at first, but didn’t take too long to get the hang of. I got some of my favorite shots of the weekend, one of Thorsten and one of someone eating at the counter.

When we got back from lunch we had an afternoon session taking portraits of each other, followed by an evening portrait session with Joy Villa. I was definitely digging the Leica by this point, it had such a simple and intuitive interface compared to my Sony. 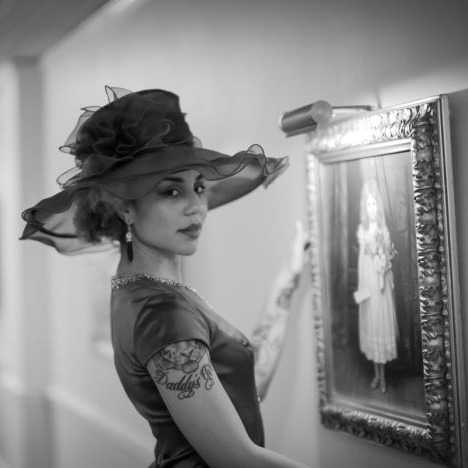 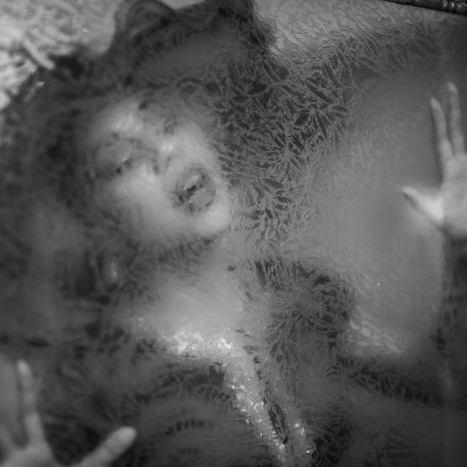 We wrapped up the workshop with a long session on Lightroom. He prefers the old set of sliders and showed us how to change the UI to that set rather than the newer ones. I played with it a bit myself but prefer the current ones. He gave an overview of his philosophy of editing. My number one takeaway was an offhand comment he made about trying to make people’s skin tone look silver, the way it did back in the film days with a properly exposed picture. It has been the bedrock of my editing ever since… no matter how much contrast I do or don’t add to a picture, I always make sure people’s faces stay a beautiful light grey.

Finally he spent an inordinate amount of time on organizing catalogs and folders. At the time I was actually a bit turned off by this, so after I went home I kept doing what I had been doing. But a year or so later I realized my system was an unmanageable mess, so I adopted his approach. A year after that I was suffering from catalog sprawl, it would take me forever to remember which catalog a picture was in, so I combined all of the catalogs in to one and just used folders to separate shooting events.

I am pretty sure most of his ebooks cover this as well if you are interested. He also has a pretty old school backup philosophy with dozens of external hard drives. I personally just mirror my local drive to Dropbox for convenience and speed, but I am approaching my hard drive size limit so I am going to have to consider other options soon. Update: since this review I have switched to a 4TB external HD and set it up to automatically sync to pCloud. This should buy me a few more years.

I really enjoyed the workshop. It was my first one and I can only explain it in the context of workshops I have taken since. In comparison it was not particularly technical or classroom heavy. For anyone who wants to come away with a book full of notes and rules this may not be the workshop for you. I personally just really love his work and wanted to see how much of his mindset I could absorb and he was incredibly open about how he approaches photography. I am very glad I attended.

A camera is a tool, and like all tools it has a purpose. The purpose of my camera is to tell a story. Candid. Public. My small contribution to a classic genre.